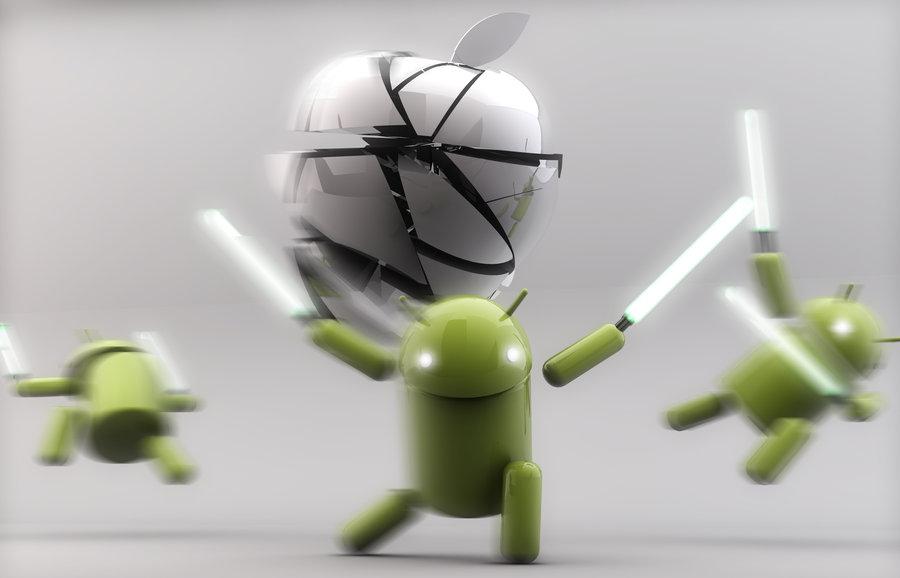 Apple’s iPhone is the world’s most famous smartphone, but there are many reasons Android takes 57 percent of the U.S. market
and as much as 80 percent in other countries. Apple provides a
completely catered, top-down experience in which it dictates exactly
which apps you can run and which features your phone can have. But
Android takes off the training wheels and lets consumers have a swath of
hardware and software to choose from, along with access to key
technologies, such as NFC pairing and haptic feedback, that Apple
doesn’t think its users are ready for.

Like the father in a 1950s sitcom, Apple thinks it knows what’s best
for you, no matter what you need or want, so it locks down the UI and
offers fewer customizations than Google. Whereas on the iPhone, you can
put a few select widgets in your notification drawer, with Android, you
can choose from thousands of widgets that live on your home or lock
screens and provide everything from music playback to weather and
note-taking.

Manufacturers such as Samsung and LG add custom
“skins” on top of the core operating system that offer a unique look and
feel, along with features Google hasn’t implemented yet (e.g., gesture
controls and Air View). Better still, you can install your own launcher
or add a custom theme, which makes your phone look and feel completely
different — and yours.

Google’s marketing tagline for Android is “Be Together. Not the
Same.” That makes sense, because the platform appears on hundreds of
different phone models around the world. You can get Android phones with
giant screens, small screens, built-in projectors, QWERTY keyboards,
replaceable batteries and even second displays (e.g., YotaPhone 2).

Perhaps
most important, there are many rugged Android phones that are made to
survive being submerged underwater or dropped. If you want a new iPhone
today, you have four choices: a large-screen iPhone 6 Plus, a midsize
iPhone 6 and two old models: the 4-inch iPhone 5s and iPhone 5c. None of
these is made to take a beating.

3. Freedom to install any app you want

Apple may get some apps first, but it also limits which apps you can
install by forcing you to go through its tightly controlled app store.
If the tastemakers in Cupertino decide that an app competes with Apple
or is too violent, sexual, political or controversial, you won’t be able
to buy it. While Google has its Play store for Android, it allows
competition from alternative stores, such as Amazon’s Appstore. You can
also take any APK file you download and sideload it on your own.

Want to copy files from your iPhone to your computer? You’ll need to
install iTunes and set up an account, and even then, you can move only
media files, such as photos, back and forth. Plug an Android phone into
your PC, and it instantly mounts as an external drive filled with
folders you can drag and drop. You can also navigate through the file
system on the phone using apps such as Astro File Manager or ES File
Manager. Apple apparently doesn’t trust you to see the file system on
your iPhone.

You see a Web page in your browser, a map in your navigation app or a
photo in your gallery, and you want to share it. On Android, you can
share to any service whose app you have installed: Twitter, Facebook,
Google+ or anything you’ve installed. Google doesn’t need to bless an
app for it to show up in the sharing menu, nor does the browser maker,
the navigation app publisher or drawing app developer.
MORE: The Best Android Apps to Try Today
Unfortunately, on the iPhone, you can share only to the apps that the
browser, photo gallery or other app specifically support. So, because
Apple doesn’t think much of Google+, WhatsApp or Pinterest, you can’t
share to them from Safari, and you won’t be able to unless Apple’s
gatekeepers specifically build in support.

Android’s back button provides a really simple and helpful way to
return to a previous screen no matter where you are. The button even
works across apps. If you hit a link in Facebook and get transported to
the Chrome browser, you can return to the social media app when you hit
the back button. On the iPhone, you can use only app-specific navigation
or hit the home button to end up back on the home screen. That’s a lot
more swipes and taps that waste your time and tire your fingers.

If you want to multitask on your phone, you want an Android phone
from Samsung or LG. Both of those brands let you split your screen
between two apps, allowing you to, for example, look at the company Web
page in one window while you reply to your boss’s email in another.
Google hasn’t built multiwindow mode into the Core OS yet; it is adding
that ability in the next version, called Android M. Apple is adding a
split-screen view in iOS 9, but only for tablets, not phones.

Apple is often the last to adopt new technologies  and, when it comes
to screen resolution, the iPhone trails the field by a wide margin. In
2014, the company finally released its first full-HD phone, the iPhone 6
Plus — two years after the first 1080p Android handset debuted. Today,
several of the leading phones have 2560 x 1440 displays, which makes
them a lot sharper for high-res video viewing, reading and gaming.

There’s nothing quite like tactile feedback when you’re typing or
interacting with buttons on-screen. On a computer, you usually get that
feedback from the physical keyboard and the click of the touchpad or
mouse. However, on a phone, you need the buzz of a haptic vibration to
know that your touches have registered. All Android phones offer haptic
feedback, but iPhones don’t. There’s a rumor that the company’s new
Force Touch technology, which provides haptic feedback, will appear on
the next iPhone — seven years after it made its Android debut on the
T-Mobile G1.

For several years now, all Android phones have come with NFC (near
field communication) chips built in. With NFC on board, you can tap to
pair with gadgets, tap another phone to exchange files or contacts, tap
information tags, tap to unlock a door and even tap to pay using Google
Wallet. Apple incorporated NFC into the iPhone 6 and iPhone 6 Plus, but
you can only use it for Apple Pay

Installer 5 tweaks manager is available in the final version, which means everyone can install and use …